In recent times, we have seen biggest correction in the U.S. market since November 2016. On 3rd Oct 2018, Dow Jones made a life-time high of 26,952 which was appreciated by the President Donald J. Trump in his tweet, “The Stock Market just reached an All-Time High during my Administration for the 102nd Time, a presidential record, by far, for less than two years. So much potential as Trade and Military Deals are completed.”  But index couldn’t digest this hike and within a month of its life time high, on 29th Oct 2018 its slipped more than 11% & made a record low of 24,122. Same goes with other major indices Nasdaq composite and S&P 500. As the market went down, numerous reasons came into lime light, rising bond yields, fears of escalating tensions with China over trade and third time rate hike by Fed. All these factors come into the picture after the incident has taken place. These are news driven factors but what about the economic conditions of the country?

On contrary to the blood bath in the market, the US economic data had shown strong set of numbers during this quarter. Corporate earnings were good, US quarterly GDP growth rate made a high at 3.5%, Unemployment rate was also at its all-time low of 3.7% and Inflation was around 2.3% and the US currency also became strong. This leaves common investor wondering, if the economy is doing well then stock market should also follow the suit. No, not necessarily, before explaining this point we would like to point out that there are two types of information available in the market:

For investing in stock market, we need to follow information for the classes, not for the masses. Media will always try to show you the bad picture of everything & will always try to confuse you. “The masses” believe that “if the economy is doing better, so the stock market should also do better too.” But learned investors say “An ‘economist’ is a trained professional paid to guess wrong about the economy.” The Oracle of Omaha, Warren Buffet doesn’t think about the economic numbers while investing in stocks, he always looks for the company growth rates & earnings. There is no correlation between the economy and stock market because former is macro concept and latter is micro. Peter Lynch, famous stock market investor & money manager has said; “If you spend 13 minutes thinking about economic forecast, you’ve wasted 10 minutes.” Now let’s look out the crash of 2008. 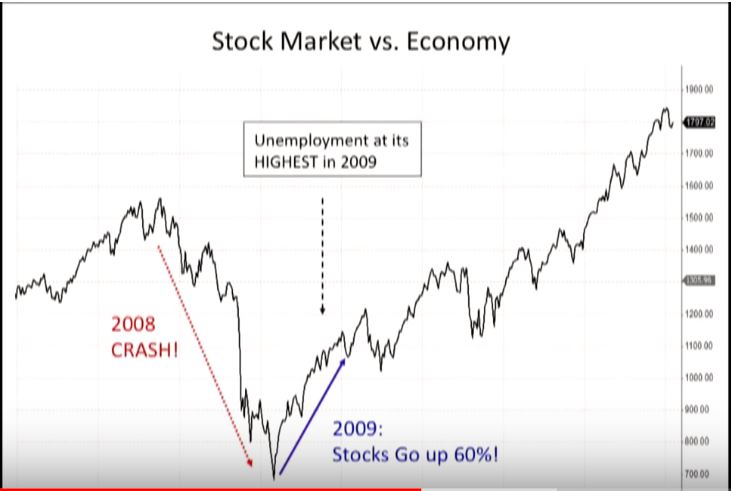 In the above chart you can see that in 2008, when market crashed, US economic data showed that economy was doing really well. But in reality, it was in a bubble situation, & finally the bubble burst. After that in 2009, the market was trading at all-time low. There was blood all over wall street, no one wanted to invest in stock market. The Great Recession spread depression & pain among the investors which forced them to dump their stocks. Unemployment came at its highest level and suddenly just after a year of good economic data economy was doing worse. GDP growth rate fell to record low.

But to everyone’s surprise the market went up by 60% in the end of that year itself. Who was buying stocks at that point of time and why? The Insiders were buying at that time, the people who follow information for the classes not for the masses. They are the big shots investors, institutions like Goldman Sachs, J.P. Morgan Chase etc. It’s a fact that only 20 large funds do the world’s 80% trading. They have between 50-100 billion USD under management. These institutions employ the smartest people in the world to analyse the future economic trend because stock market is forward looking and we can anticipate the upcoming economic scenario with stock market reaction. The moment any data is released, the market has already reacted to it. That is why investors like Warren Buffet are always ahead in the game. Hence, the best time to invest in stocks market is when everything is bad. When nobody wants to buy, they buy & vice versa because at that time you can get the shares of really profitable companies at discounted prices. Always remember what the American Oil tycoon, John D. Rockefeller had said, “The way to make money is to buy when blood is running on the streets.”

I am an Investment Professional having knowledge and skills in capital & bond market, Banking & finance as well as marketing.